One of the items I wanted to tick off from my bucket list while in London was the Charles Dickens Museum. I came to Dickens relatively late in life, falling in love with Oliver Twist and going from there.

The museum is at 48 Doughty Street, Holborn.

Dickens lived in this elegant house from 1837 till 1839, and while here wrote Oliver Twist and Nicholas Nickleby.

I was thrilled to see an actual letter written by Dickens to his publisher. Love the  signature.

This is the actual desk and chair on which Dickens wrote many of his later works, including A Tale of Two Cities, Great Expectations and Our Mutual Friend. They stood in the bay window of the study at his home, Gad’s Hill Place, overlooking the front lawn with its sweeping drive. They were purchased by the National Heritage Memorial Fund in 2015. 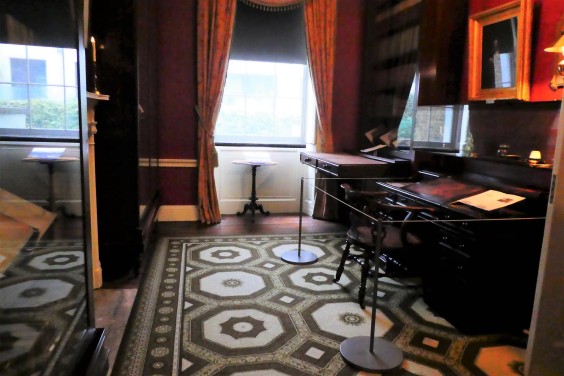 I definitely took more photos than this but they must have gone the way of the others I lost on that trip. I really recommend the website for a good look at the house and the many artefacts.

I ticked a lot off my bucket list while wandering around the city. After touring the Houses of Parliament, I caught the ferry along to the Globe Theatre. Very sadly, I didn’t get a look inside as there was a Saturday matinee on and it was booked out. So I sat in the cafe and discussed Brexit with a couple of locals instead.

From there I crossed back over the river and walked back to Strand, discovering all sorts of gems along the way.

This monument was designed by Christopher Wren to commemorate the Great Fire of London 1666, which burned for three days, consuming 13,000 houses and devastating 436 acres of the city. The monument is 202 ft. in height, the exact distance westward from the bakehouse in Pudding Lane where the fire broke out.

St. Mary le Bow Church in Cheapside is prominent in the story of Dick Whittington and His Cat and the nursery rhyme, Oranges and Lemons. According to tradition, a true Cockney must be born within earshot of this church’s Bow Bells. (I got that from Wikipedia. I hope it’s right.)

It’s a bit of a surprise to look back and see stunning St. Paul’s just sitting there in the middle of all the traffic.