I enjoyed my exploration of the south of England in 2016 enormously, and I thought I’d list a few of my favourite spots, some of which I’d been wanting to check out for years.

Ever since watching the original series of Poldark in the 70s, I’d wanted to visit Cornwall and walk those dark, stormy cliffs.

I found my way by bus from Penzance to Botallack, to the tin mines around which the series was set. This is the one set deep into the ocean that was used (as I remember it) in the series. The current Poldark series is also filmed here.

The steps that got me down and the ocean below. What you do for a good photo. 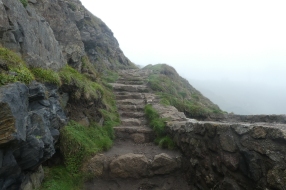 Also while in Penzance, I wanted to catch a show at the Minack Theatre, carved into a cliff looking out over the ocean. It took most of the day, Cornwall’s bus services being very strange, but it was worth it. I was very lucky to get there for the last matinee of the season.

And then there was Doc Martin. I was determined to get to Port Isaac, AKA Port Wenn. It took two trains and two buses to get there from Salisbury but again it was worth it. My little room was in the old schoolhouse, now a hotel, and looked straight across to the Doc’s surgery.

I’d chosen Chichester as one of the stopping off points on the way from Cornwall back to London because of its famous Festival Theatre and found, when I arrived in the city, I loved everything about it. Such a pretty, comfortable-looking place. The cathedral had a lovely community feel about it. Each hour everyone, including tourists, stopped for a couple of minutes of prayer and then went about their business. Off the cloisters is a restaurant with cheap, healthy food, which I took advantage of both days I was there. I would like to go back to Chichester and give myself more time to check out its long, very interesting history.

In Salisbury, I caught a bus a few kilometres out to Old Sarum, the original site of Salisbury before the bishop fought with the king and moved the cathedral to where it is now. The footings of the original cathedral can still be seen, along with the remains of the castle, moat and all. It’s a fascinating place if you’re into English history and it was a nice foray out into the countryside after spending all my time up until then in cities. 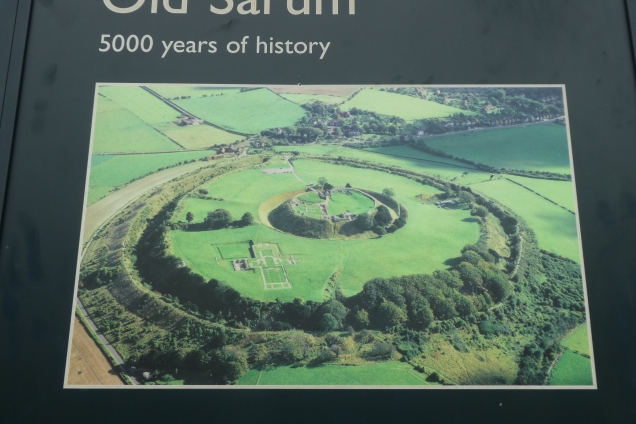 Back in Salisbury, I was wandering along to check out the cathedral, the main reason I went there,when I was stopped in my tracks by this sign. 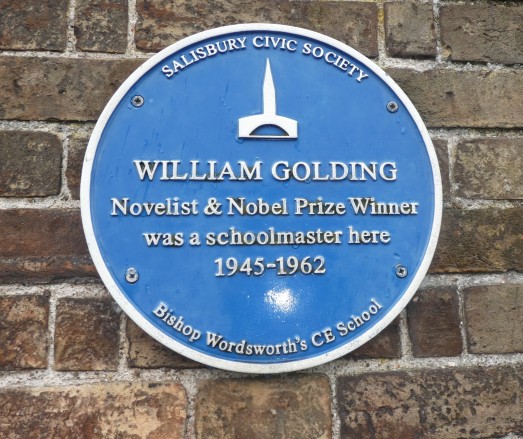 That’s the William Golding who wrote the brilliant and terrifying Lord of the Flies.

In Salisbury Cathedral, I was able to view a section of the original Magna Carta.

I stopped at every cathedral along the way of course, and quite a few churches as well, but my favourite was Bath Abbey. The sun shone through the massive stained glass windows, sending coloured lights dancing around the white walls, and with the choir singing beautifully, it was something I’ll always remember.

Early in the trip, I was lucky to catch the last of the Buckingham Palace tours and was able to see the coronation coach, remembered as a young girl from film and photos of the Queen’s coronation, along with some of the other ceremonial coaches. 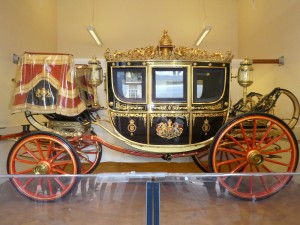 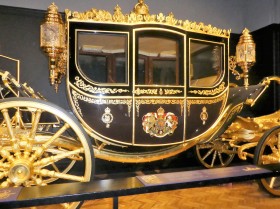 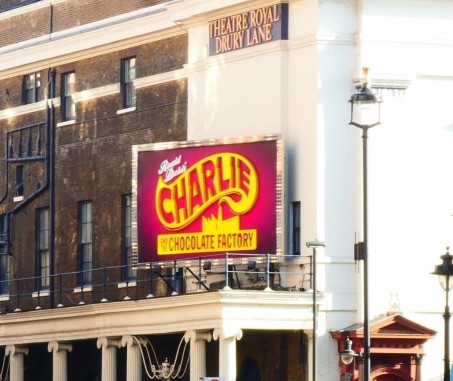 I discovered on my last trip to England that if you time it properly, you can get cheap accommodation at the university colleges while the students are on their break. Apart from the cost, I just love staying in those surroundings. I’d always wanted to drop ‘when I was at Oxford’ into the conversation, so in 2011, I stayed at Balliol in Oxford. This time in Cambridge I chose St. Catharine’s, right in the middle of everything and just one block from the river.

I’m a control freak and so I always take a long list with me. That way there’s less chance of missing things, but then on arriving home I discovered I missed them anyway. One of my big disappointments was that, from a mix up in Cornwall causing me to lose a day, I missed out on St. Ives, which looks just lovely. And how could I have missed out on Greenwich? Again?