In 2010, I spent two days in Christchurch, on the east coast of New Zealand’s south island, before taking the TranzAlpine Railway to Greymouth on the west coast. The next morning, I picked up my first-ever rental car and headed south towards Queenstown.

I’m not sure what gauge is used to determine travel times on maps but it’s certainly not mine. I was supposed to arrive around 5pm, but it was 7pm and I was on autopilot, as I pulled into Makarora Tourist Centre, in Mount Aspiring National Park.

My accommodation was a wooden, A-framed cabin, with a little pathway round a corner to an outdoor lavatory. It was surrounded by bush, which, in turn, was surrounded by mountain peaks, the one in the centre still snow-capped. They towered over me, protective and paternal, like giant guardians. I collapsed onto one of the single beds, breathing in the pure air.

There were no televisions or radios to get in the way of the sounds of the forest. I lay in the dark, wondering which noise belonged to which creature. The trees rustled in the wind and there was a strange squeaking noise I wished I understood. I wondered if I was imagining the scratching at the door. The window above my bed didn’t close properly and I hoped none of the local inhabitants decided to join me for the night.

It gradually became colder, too cold to sleep without more blankets. I threw the doona from the spare bed over mine and zipped across to the kitchenette for a glass of water to finish off my fourteen-hour day.

I knew the strip of vinyl in front of the sink was highly polished because I’d slipped on it in my socks earlier in the night and I guess, if I’d been less tired, I would have thought to put the door mat there, or perhaps my runners, just to remind me of the fact. This was what I was thinking as I hung in mid-air, grabbing at the sink to try and save myself.

It’s not the falling that hurts – it’s the sudden stop at the end. Pain seared through my lower back. I’d fallen over in the garden a couple of years before while ridding myself of a half-dead Australian native, choosing the gas meter as the place to land. It took me weeks to get over that one. I wondered if I’d done it again.

I was too frightened to move in case I found I couldn’t. My phone hadn’t worked since I’d arrived in the country, so I couldn’t contact anyone and if I couldn’t move, I couldn’t get to it, anyway.

Still, I definitely couldn’t stay on the floor all night. I rolled slowly onto my side and all was well. Clutching the cupboard door handle and then the sink, I dragged myself up, hobbled to the bed and slid under the doonas. Too tired to cry, I sank into sleep. 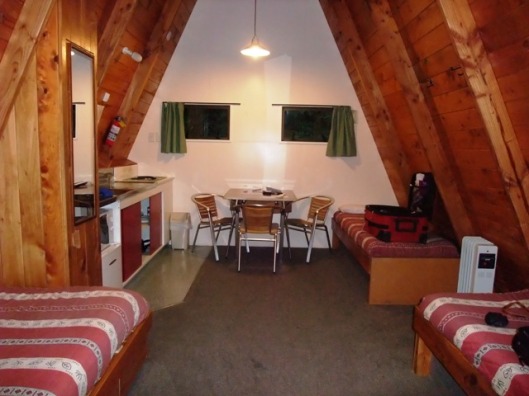 My lower back screamed as I rolled over to look at the light, strained through trees into the windows at the other end of the room, and remembered my predicament. Easing myself up, I placed my feet on the floor and stood up. Everything’s relative. Hobbling would not be my choice of movement except as an alternative to not walking at all.

Getting into the car was a major manoeuvre and the seat felt even harder than it had the day before. I’d slept well, though, and apart from the base of my spine crying like a baby, I felt refreshed. I wasn’t sorry I chose this spot, although it provided me with a few surprises. I will never forget my night in a wooden cabin surrounded by bush, in the company of birds and night creatures, watched over by magic mountains. 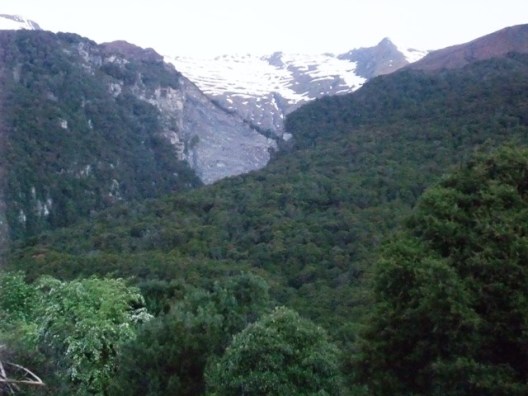