In Queenstown, I boarded the steamer, T.S.S.Earnslaw, for a cruise along Lake Wakatipu to Walter Peak High Country Farm. T.S.S.Earnslaw is the last surviving of the grand steamships that graced Lake Wakatipu. It served the remote farming communities around the lake, transporting cargo, livestock and passengers. These days, it’s tourists.

I braved the cutting wind on the deck: I wasn’t missing out on this scenery for anything. The stillness of the huge lake softened the rugged grandeur of the mountain peaks surrounding it and the proliferation of slick tourist accommodation along its edge. Sunshine sparkled on the water. American accents crackled around me and I was the only one getting the dry jokes from the Australian skipper. 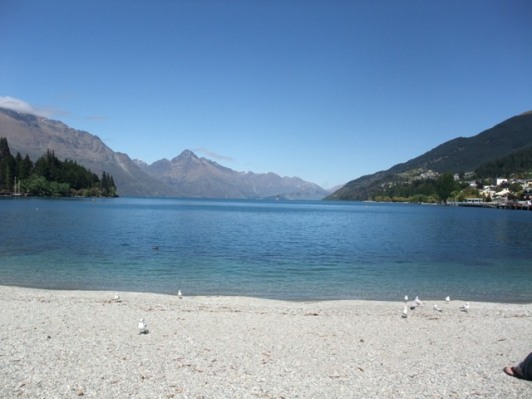 The sheltered bays around Walter Peak were originally used as camping sites by Maoris travelling to the Maraoa and Oreti rivers on hunting and gathering expeditions. European settlement began here in the 1860s, but wasn’t successful until the Mackenzie family took over the station in the late 1880s. At its peak, it covered 170,000 acres, with 40,000 sheep and 50 full-time employees.

I wonder at the fortitude of the early settlers. It must have seemed a god-forsaken place, especially for the women, surrounded by the dark mountains with the wind ripping off the water and little access to the outside world other than by steamship.

This day, though, with the sun reflecting off the red roof of the sprawling white colonial homestead, and lawns and gardens of roses, hydrangeas, marigolds and dahlias surrounding the house and spreading down to the water’s edge, it was spectacular.

New Zealanders farm deer, not just for meat but for what they call ‘velvet’. Stags grow a set of antlers each year which are naturally shed in late winter or early spring. These rapidly-growing antlers, known as ‘velvet’, are soft. Before they harden and calcify, they are removed under anaesthetic, for exportation, mainly to South Korea to be used in oriental medicine.

I wasn’t totally comfortable with this news. I felt like apologizing, as a stag approached and stuck its nose through the wire. He was gorgeous but, not keen on having deer slaver on my hand, I decided to forego the experience of feeding him the granules provided. 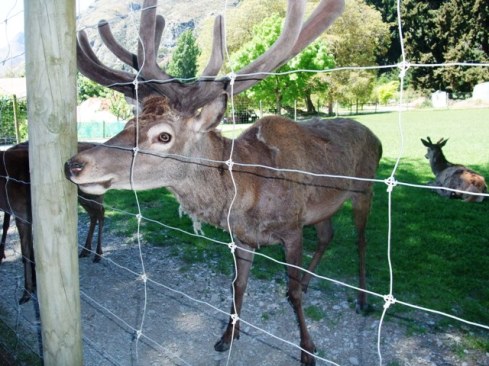 Alpacas relaxed in the shade of a tree. I hung over a fence as a Scottish Highland cow ambled past, her long red hair glowing in the sun. There was a bull following her. I won’t say where his nose was planted, but if I was the female I would have been extremely irritated, though she wasn’t exactly pushing him away. Maybe it was a compliment – or maybe he just liked redheads. 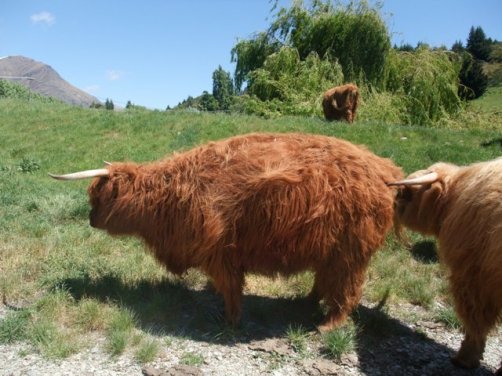 The children bottle fed a black lamb and we moved inside for a delicious pikelet and scone afternoon tea. Sheep dog and shearing demonstrations finished the afternoon and the hooting of the steamer drew us back to the lake.