Anyone who happened to follow me around England would become very sick of cathedrals and abbeys, and even everyday churches. I can’t walk past a church without checking it out. Each one is a little different (or very different) to the one before, although after a while I have trouble remembering which is which without looking at the photos.

Bath Abbey stands out as one easily remembered.

Light strains through enormous stained-glass windows, speckling colour across the white stone of the walls, pillars and arches. Instead of the darkness almost expected in large churches, the whole space seems to sparkle with light. As someone who needs lots of light for her brain to achieve some sort of order, I was in heaven. 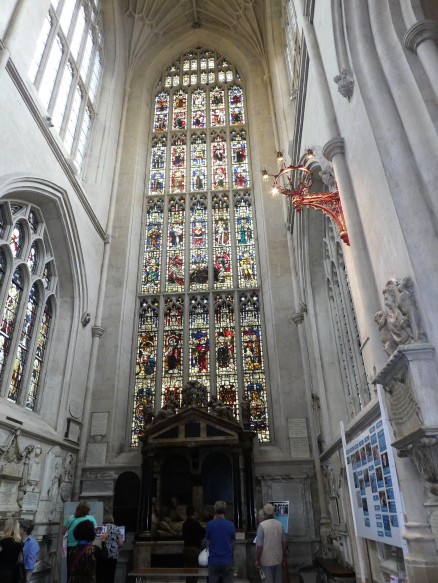 During the war, the East Window was blasted out by bombs. Members of the abbey collected thousands of pieces of broken stained glass and stored them in sacks. After the war, they were brought out and over the next ten years, even though it was considered impossible by almost everyone, were painstakingly put back together again.

A sung service was about to begin as I entered, and so I settled back and was carried away by the sublime voices of the Bath Abbey Choristers.

I love discovering quirkiness when travelling. I had, by luck, arrived in the middle of the Jane Austen Festival. Jane is on a bit of a pedestal in Bath, having lived here for a while and set two of her novels here: Northanger Abbey and Persuasion. During the ten days of the festival there are concerts, tours, workshops in harp-playing and bonnet-making, Regency dancing and even archery.

I discovered a lecture and debate on Sense and Sensibility. Sounds dry, I know, but it was actually hilarious. I hadn’t realised you could get such a laugh out of Jane Austen.

On the last Sunday of the festival, locals dress up in late 18th century gear and promenade along the street pretending, just for a day, that they’re in another era. 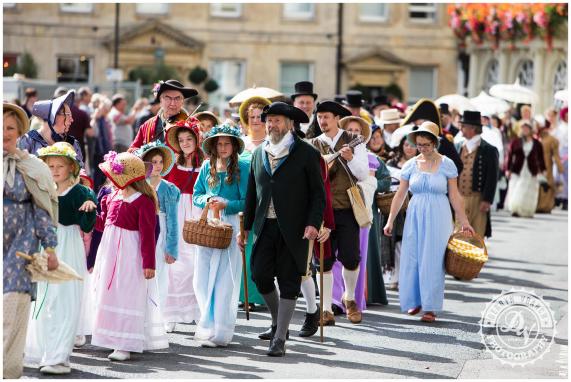 I wouldn’t be too happy about having to throw on a bonnet every time I went outside but I totally approve of the flat shoes. That was before women decided to start clomping around in stilettoes.

The Jane Austen Museum is on Gay Street. For anyone interested in Jane’s life and the times of that era, it’s really worth a visit.

Late in the afternoon, as I was wandering from street to street, my mind on hold, I came across a memorial to Captain Arthur Phillip, an armillary sphere, commemorating the bicentenary of his death.

I hadn’t realised Phillip lived in Bath. After governing the new colony for five years, he gave in to illness and returned, living the last eight years of his life here.