It was recommended, while in Rotorua, that I visit Whakarewarewa Living Maori Village, which is to say people here still live in the traditional way. As I arrived, a guide was explaining the enormously long, original name of the village, to a group of school children. ‘Te Whakarewarewatanga O Te Ope Taua A Wahiao,’ she said, slowly. ‘Three hundred years ago, a warrior chief named Wahiao, got together an army to get back at the people who killed his father. And so that’s what the name means: The Gathering Place of the Army of Wahiao. 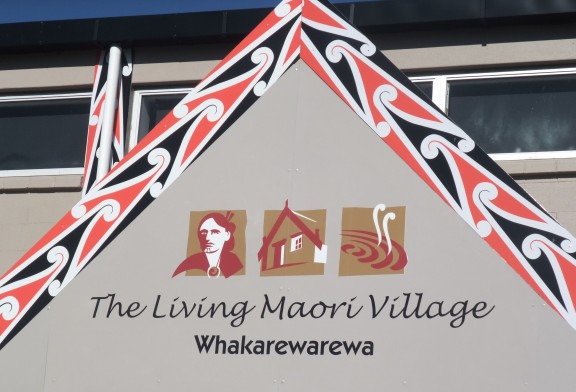 Our own guide arrived and ran us through the same procedure. ‘Today,’ she said, the name has been shortened to Whakawerawera, or just Whaka.’

We followed her through a memorial arch, erected after World War ll to commemorate fallen tribal members who served in both wars. 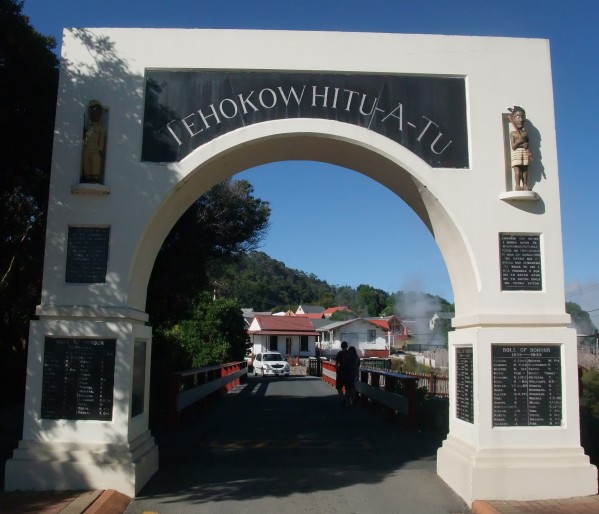 To the right were models of traditional sleeping quarters. For some reason I didn’t take photos of them but they showed how women and children slept inside while the men slept outside, to make sure the surroundings were safe. There were many other tribes wanting to occupy this land for its warmth and abundance of food. ‘Prime real estate,’ our guide pointed out.

‘Gather around,’ she said, as she led us up a path to a large box-type contraption with a lid. ‘This is our microwave. The first inhabitants of the village discovered that by trapping the heat from the ground, they could cook food. I can’t take the lid off to show you, because the stone on top means our dessert is cooking.’

We moved across to a large steaming, bubbling pool. ‘This is our kitchen,’ said our lady. ‘It’s where we as a tribe cook, clean and bake.’ I moved closer to see what she meant by kitchen. ‘The food is placed in a calico bag, attached to this rope and dropped into the water. A lobster takes around two minutes.’

Two minutes to cook a lobster? I couldn’t help thinking how much power you’d save living here – and time. It definitely appealed to me. I could handle not having to clean ovens or stove tops – if I could just stand the sulphur smell. This was the first time I’d been right in the middle of it and I was starting to feel sick. 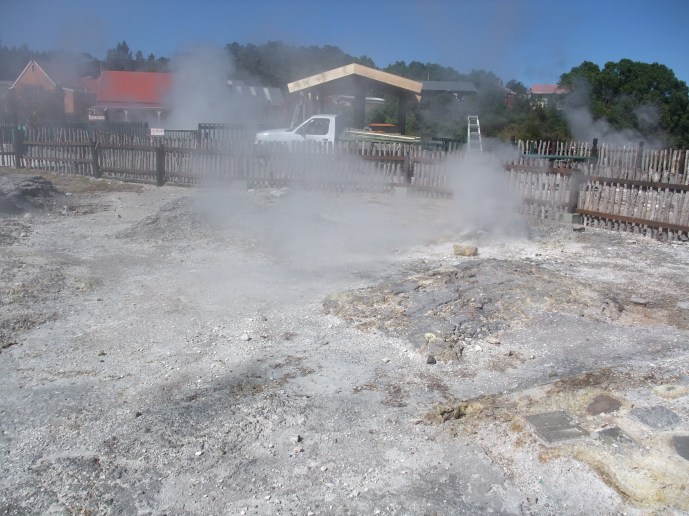 We moved on again to a set of large rectangular wooden boxes. These were the village communal baths. Grandparents, parents and children bathe here together daily, either early morning or late evening. No clothing is worn during communal bathing. I changed my mind about living here.

We passed pools originally used as the village copper to sterilise linen and babies’ nappies, pools that are affected by the change in atmospheric pressure and so forecast the weather, and a large mud pool, used for the treatment of ailments.

We arrived at the Ancestral Meeting House, named after Wahiao. I was disappointed we weren’t allowed inside to see the tribal carvings but I suppose some parts of the village are sacrosanct.

We climbed an extremely steep hill to To Kohanga Reo/The Language Nest. The Maori language was introduced into the school curriculum in 1982, after a movement by the Maori people to retain their language. Maori, only, is spoken in the village pre-school, which takes children up to the age of five.

After explaining the very interesting Maori rituals around death and mourning, she left us to explore. I headed out along the walkway at the rear of the village. No matter where I looked, steam wafted and drifted, blown by the breeze. 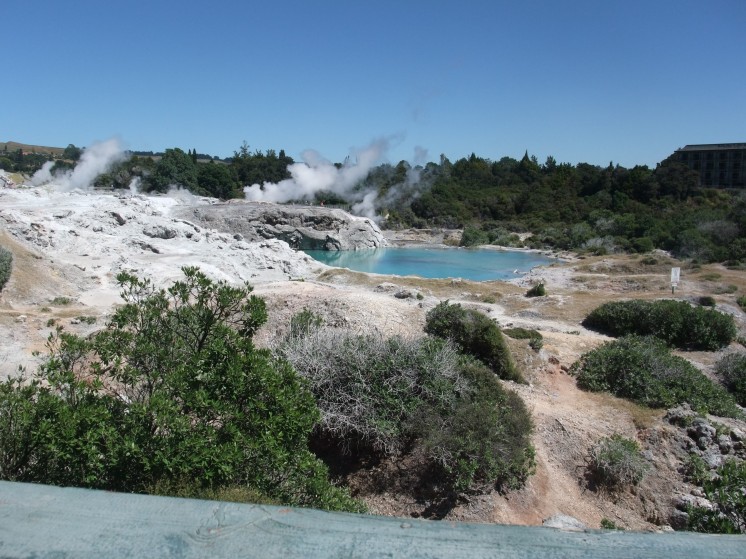 Little mountains of cooled mud sat along the pathway. Mud pools popped and fizzed from under a little bridge, giving just the tiniest hint of what’s going on inside the earth. Bubbling emanated from beneath shrubs, and it was odd, as if it was coming from the bushes themselves. Makeshift fences were a reminder of how dangerous it would be to stray from the track. 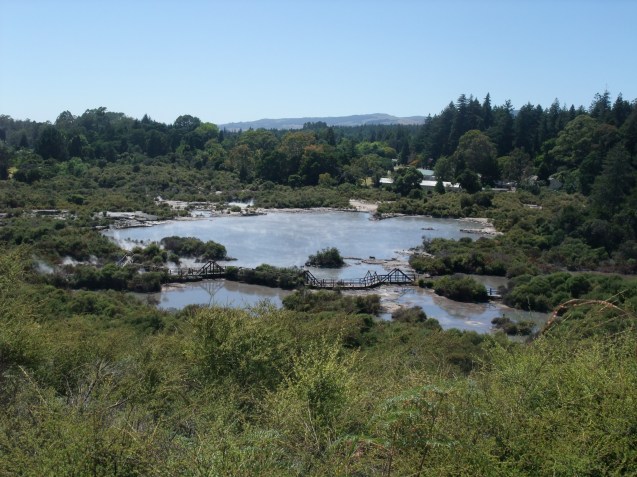 I’m a notoriously plain eater but I decided to take the advice of the guide and try a traditional Maori dish – hangi pie. It’s a parcel of chicken, corned beef, carrots, kumara, cabbage, stuffing and gravy. Absolutely delicious. 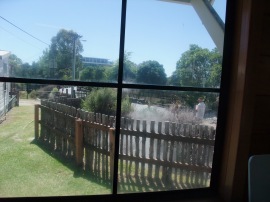