Having explored the Point Nepean Quarantine Station, I wanted to continue to the tip of the peninsula. A fine day was forecast, so I headed out early and was in Sorrento for a coffee by 8am.

In 1870, the British Imperial troops left Australia, leaving the colonial governments to fend for themselves. A string of fortifications was installed around the entrance to Port Phillip Bay to prevent enemy ships from entering. Point Nepean was the largest and most heavily armed, and was a critical part of Victoria’s defences.

Years ago when I came down here for a look around, the area was an army firing range and so closed off. The army left in the 80s and it was declared a national park and opened to the public.

No vehicles are allowed inside the park, but there are various walking tracks and a transit bus to drop you at different spots along the way. I decided to walk to the end and catch the bus back.

I wandered along Coles Track in the sunshine to the Point Nepean cemetery.

The cemetery was established to replace the Quarantine Station cemetery after they discovered beach erosion was unearthing burials. The cemetery is the resting place of quarantine deaths, early settlers, shipwreck victims, sailors and defence personnel.

These six graves are outside the cemetery boundary and were reburials of people exhumed from the original Quarantine Station Cemetery in 1852. 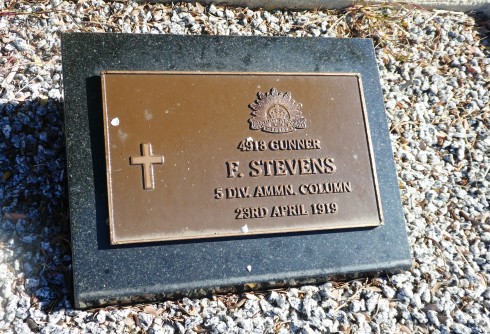 I was a bit nervous around these magpies. Magpies can be very intimidating at this time of year, quite happy to attack you if the fancy takes them, so I gave them a wide berth. 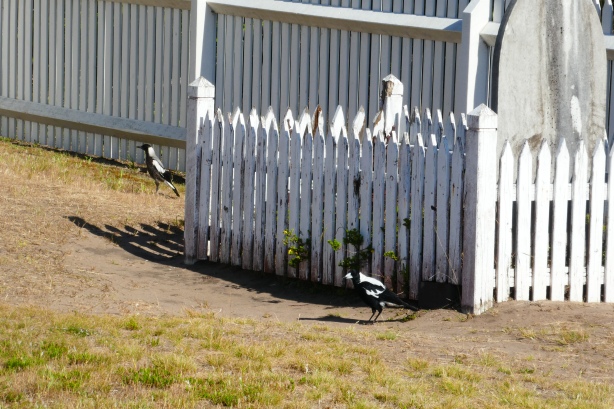 Coles Track led me back to the bitumen Military Road and up the steep climb to Cheviot Hill, looking out over Bass Strait. In 1942, two gun emplacements, a battery observation post and living quarters were built into the hill, so as not to be vulnerable to air attack. 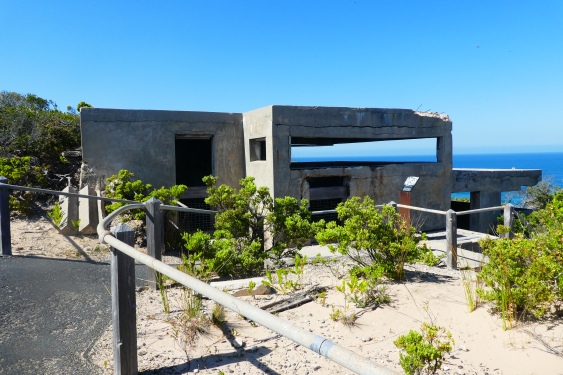 A bit further along is a memorial. One of the more weird things in Australian history happened on 17th December, 1967, when the then Prime Minister, Harold Holt went for a swim at Cheviot Beach and was never seen again. The disappearance fuelled many conspiracy theories including abduction, assassination and suicide, but a 2005 coronial inquest (a bit late in the piece, perhaps?) found the PM had accidentally drowned.

It was hard work trudging up the hills they don’t tell you about in the tourist information but it was worth it to be able to look across both Port Phillip Bay and Bass Strait at the same time, and across to the Point Lonsdale lighthouse on the other side of the entrance. Such a beautiful spot, though dangerous. Because of large tidal flows through the narrow channel, only 3300metres wide, and a high rocky seabed, ‘The Rip’, as it’s known, has been the cause of many shipwrecks over the years. 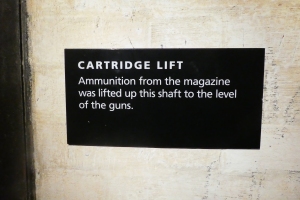 The latrines were built on the cliff edge, a bit dangerous if you were half asleep in the middle of the night. You could do a Harold Holt and disappear forever.

By this time, I was very happy to catch the bus back to my car, though I’m never quite comfortable giving myself over to a bus driver, especially on such a narrow road with beach on one side and crashing ocean on the other. I shut my eyes for that bit.

I had an idea of catching the ferry across to Queenscliff and driving along to the Point Lonsdale lighthouse but realised I’d had enough for the day and would leave it for next time.