A couple of weeks ago, I took off with my four adult children to Noosa, on Queensland’s Sunshine Coast, for my nephew’s wedding. The week before, Australia’s east coast had been hit with violent storms, causing damage all the way down to Tasmania. We were worried. It was to be an outdoor wedding, in a gorgeous spot called Hidden Grove, a swathe of lawn surrounded by trees and shrubs at the edge of the beach.

But we needn’t have worried. By the time we arrived at Maroochydore Airport, where we’d hired a car to drive the half hour to Noosa, the sun was blazing and it was a beautiful 24º. It stayed that way for the next three days. A light breeze blew during the wedding to take the sting out of the afternoon sunshine. A perfect day in paradise.

I’m a Queensland person by nature, I’ve always thought. I need sunshine and warmth to feel completely well, so it was a little hard, to say the least, returning to Melbourne’s winter, especially after the luxury of the Noosa Crest, slotted into a steep hill over-looking the canals and the winding Noosa River, to the township and the coastline of beaches, distant hills and the National Park. 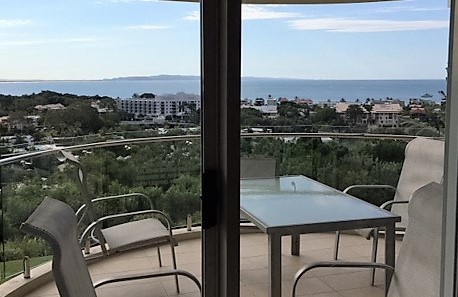 We had a three-bedroom apartment and I, being the elder, was offered the main bedroom. I didn’t argue for long – I don’t often get access to a king-sized bed, a two-sink bathroom and my own balcony, complete with banana lounge.

The Crest has its own boardwalk, leading down the hill through forest and parkland to Hastings Street, where we turned up for lunch the first day to greet the bride and her Japanese family. Hastings Street runs along a spit, bordered on one side by golden sand and the other by the river.

At one end of Hastings Street, a pathway takes you up to a cliff walk through the National Park. Tracks lead into the park itself. It’s a stunning spot, looking over tessellated rocks along the shoreline and out across Laguna Bay. 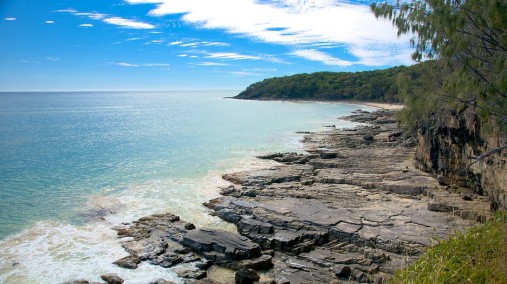 Noosa and the surrounding districts are a heaven for ‘foodies’. We walked, ate, walked, drank and ate again – which is what you do when you’re catching up with relatives. That was our excuse, anyway. The sun disappeared under misty rain and fog for the last two days but it didn’t stop us eating and drinking, though it did put a slight damper on the walking. Now for my diet.