I’d often been told I should go to York and so, in England’s autumn of 2011, I boarded a train at Manchester and headed north.

York has had many incarnations since the Romans left in A.D.400:  Anglo Saxon, Viking, Norman, led by William the Conquerer, and the Tudors. Wars have come and gone, and bust times and booms. In the 1970s and 80s, industrial unrest and strikes swept the country and manufacturing went into decline. It was then that York realised its greatest asset was its history and the tourism it could bring.

I stowed my bags at my extremely tasteful accommodation and strolled down the street known just as Bootham, towards Bootham Bar, one of the four gateways into the old city.

There were, originally, four main gates or ‘bars’: Bootham, Monk, Walgate and Micklegate, six secondary gates and 44 intermediate towers. The defensive perimeter stretched over two miles encompassing the medieval city and its castle.

Bootham Bar is a large, square stack of stone, topped with a squat tower, complete with arrow slits at each corner. Statues keep watch over the arched entrance. It certainly would have been intimidating to anyone needing permission to come in.

A plaque reads: Roman Fortress: This plaque marks the site of the Ports Principalis Dextra or North Gate of the Roman Fortress of which the foundations as rebuilt circa A.D.300 lie just below ground. 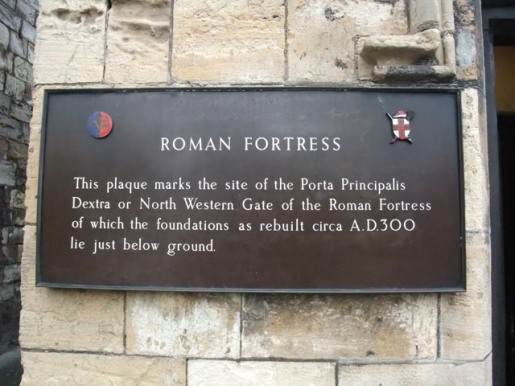 I had no idea what to expect of York, certainly not the scene that greeted me as I moved through the archway and entered another time. High Petergate follows the line of the Via Principalis, the main Roman route through York. Medieval buildings, looking just like doll’s house, squeezed against each other all the way along either side of the street, disappearing around a corner at the end. 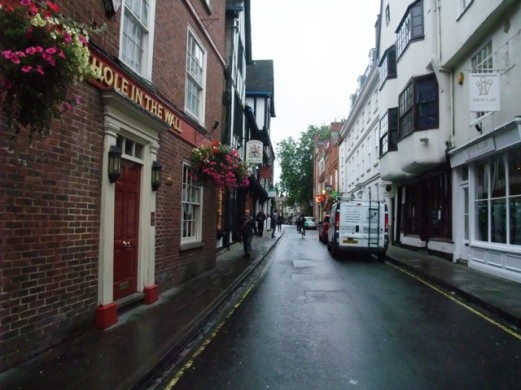 Chimneys sprouted from slate roofs. Oriel windows protruded from second-storey, wattle and daub jetties. Shop signs and hanging pots on decorative wrought-iron supports, jutted from red brick walls over latticed doorways. I could have been in a story book. Rising, majestically, above it all were the huge towers of York Minster.

Streets ran off roads, lanes off streets and connecting passageways – snickleways – off lanes, all with their shops and houses, some second storeys leaning so far toward each other, they almost met in the centre. 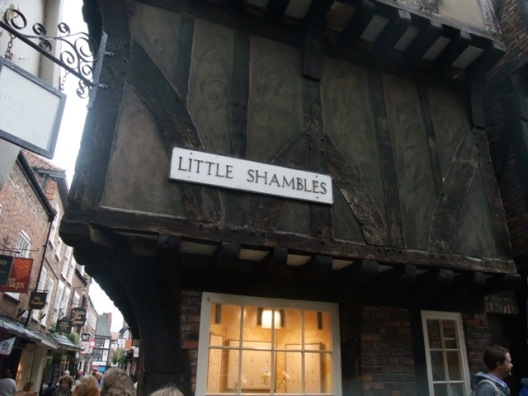 There were no cars, other than the odd delivery van, and if it wasn’t for the shops selling modern clothes, modern food and designer wares, I could just about have imagined myself back in the Middle Ages – with sewerage and plumbing.

I couldn’t resist seeing what was around every delicious little corner and I was lost within minutes, the streets winding impossibly. It didn’t matter. The towers of the Minster were my compass. As long as they were in view, I was in the vicinity of my gateway.

Around 3 o’clock, I found myself staring up at the cathedral, rambling its way over a ridiculously large stretch of parkland. The official title of York Minster is the Cathedral and Metropolitical Church of St. Peter in York. A bit of a mouthful and I can understand them sticking with ‘Minster’, a term given to churches used as centres of Christian teaching or ‘ministering’.

My guide book told me it is northern Europe’s second largest Gothic cathedral. I could believe it because I was having trouble taking it all in. I’d never seen so many buttresses, lancet windows, turrets and carvings. There’s hardly a piece of stone not decorated in some way.

The Romans had their garrison where the Minster now stands. A large statue of Constantine guards the spot where, in A.D.306, he seized power from his dying father and had himself proclaimed emperor, opening western Europe to Christianity.

This is an excerpt from, Is This the Way to Stratford? ,the third book in my Planning to the ‘Nth’ series. The first, The Edge of the World, is now published as an Ebook through Amazon. To download a free sample or to buy the book, click here.