On my second day in Oxford, I was wandering alongside the old city wall when I came upon a set of heavy wooden doors, a smaller door cut out and open, the same as mine at Balliol College. It seemed an odd place for them, surrounded by nothing but high stone walls, and I had to investigate where they could lead. Peering through, I saw a pointed arch, framing an emerald green lawn, turretted buildings rising behind. A sign said Welcome to New College. 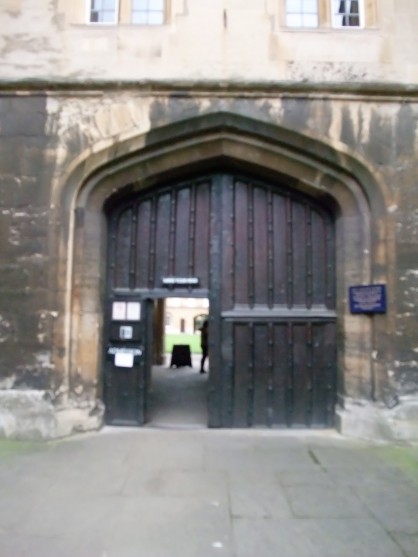 New College is one of the oldest colleges in the city. It was founded in 1379 by William of Wykeham, Bishop of Winchester, for the education of priests, and built on land that had been the City Ditch, a haunt of thieves. It was also used as a burial ground for the dead during the Black Plague of the 1340s.

Sunlight filtered through the gothic arches of the cloisters, creating soft light and shadows on the flagstone floor.

A feeling of peace settled on me. I wondered if it had affected Harry Potter this way. It was here that he warned Cedric about the dragons in The Goblet of Fire. In the corner of a small quadrangle created by the cloisters was the 19th century Holm-oak, where nasty Malfoy sat, before being turned into a ferret.

The calm feeling stayed with me as I ambled through an elaborate wrought-iron gateway into a garden, large enough to be considered parkland. The City Wall forms its barrier on one side. Sumptuous cottage plants and bushes soften the pathway and climb the grey stones.

In the centre of the garden is a large mound, an Elizabethan feature, commonly found in formal gardens during the Tudor period. With steps to make it easier for the ladies to climb, these ‘mounts’ were placed to give vantage point to those wanting to see what was happening on the other side of the wall. They must have felt very hemmed in at times.

There is a serenity to this place. The rattling of the city is muffled by the walls and I could just about imagine myself back in the country. If ever I had the chance to study at Oxford (if they took in extremely mature-aged students), New College would be a good choice. 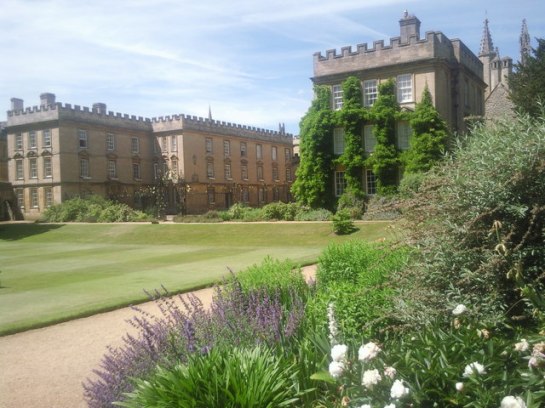 On arriving back at Balliol for my afternoon cup of tea and cookie fix, I discovered tourists wandering around my gardens. I was a little put out they’d invaded my territory without my permission.