Continuing my exploration of Victoria’s country towns, I headed up to the twin towns of Echuca and Moama, nestled on either side of the Murray River, the river creating the border between Victoria and New South Wales.

In its early days, Echuca was a thriving river town. At its heart were hundreds of majestic paddlesteamers linking the town with the inland. Produce was brought to Echuca from the properties, hamlets and forests along the river and, in turn, goods were sent back up the river.

With the arrival of the railway in 1864, goods were transferred from paddlesteamer to steam engine, and from there transported to Melbourne and around the world. Up until the 1880s, Echuca was Victoria’s second largest port. 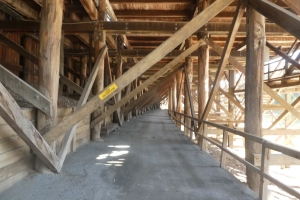 The Port is quieter now, having found a new life servicing the tourist trade. I boarded the P.S. Arbuthnot for my hour-long cruise along the mighty Murray River.

The Murray is the third-longest navigable river in the world, after the Amazon and the Nile. With its total length of 2508 kilometres, it spans three states, Victoria, New South Wales and South Australia, from its source in the Kosciusko National Park to its mouth east of Adelaide.

The level of the Murray River system fluctuates enormously between spring and autumn. The river trade could only be carried out for a few months of the year, known as ‘the season’, when spring rains and melting snows raised the height of the river substantially. That’s something I hadn’t known until now. In years of drought or low rainfall, paddlesteamers could be caught up the river for a whole season or more.

Ah, is there anything more sedating than a river cruise?

Houseboats lined up along the shore. I fancy getting myself a little houseboat and living on the river. Maybe I could learn to relax at last.

That little girl was one of the happiest children I’d ever seen. I was just wishing there was more than a bit of chain to stop her falling into the river. I seemed to be the only one worried about it. That’s what comes of having grandchildren.

Some of the lovely paddlesteamers still plying the river, though their cargo is now tourists.

Back at the wharf, we discovered the Pevensey. P.S. Pevensey is named after a sheep property on the Murrumbidgee River called Pevensey Station. In the old days, she collected bales of wool from station properties and brought them to Echuca to be loaded onto trains and taken to Melbourne for shipping overseas. The boat was used in the famous Australian television mini-series, ‘All the Rivers Run’, based on the book by Nancy Cato, made in Echuca in 1982-1983. In the show, it was named, Philadelphia.

22 thoughts on “Echuca on the Murray”