I had decided that after my week in Cornwall I would head back to London via Canterbury. Penzance to Canterbury by train is a seven hour trip so I wanted to break it up somewhere along the way. I chose Chichester, mainly  because of its famous theatre.

It was my fault, even after all the trains and buses I’d used in the last fortnight, that I still thought I would get on a train at Penzance and get off, relaxed and rested, at Chichester. Actually it took over six hours and three different trains.

It was harder work than I expected catching trains around. I was gradually discovering that the only way to get off an English train in one piece is to stand at the doorway, case in hand, as the train stops. Otherwise, the people on the platform pour in and you’re trapped.

Next time I’ll be more prepared. It’s a bit rude, though. We, at least, wait for those getting off before getting on ourselves. I wonder what others’ experiences are of British Rail.

Chichester’s plan is inherited from the Romans, the North, South, East and West shopping streets radiating out from a central Medieval Market Cross.

I was booked into The George and Dragon Inn, a pub at the top end of North Street. It was a pleasant walk along the cobbled, pedestrian-only street, past upmarket shops, boutiques and restaurants, and surrounded by quiet, elegantly-dressed people, which was all a bit of a shock to my system after, well, Penzance. I suddenly noticed how scruffy my shoes had become and I was wearing the same grey jeans I’d started out in.

A handy travel hint: if you want to disguise the fact that your jeans need washing, wear grey. You can’t tell.

A barn at the rear of the hotel has been turned into Bed and Breakfast accommodation, and I loved it. My room was complete with a little sitting area. So comfortable.

Just outside my door was the beer garden. So convenient. 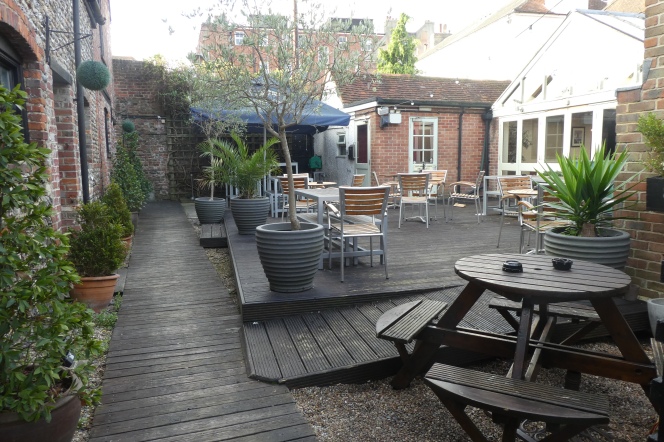 It was a terrific spot, in the middle of the shops, a short walk from the theatre and close to the cathedral.

By this time it was late afternoon. I crossed the ring road (all these towns have ring roads I was discovering, a marvellous idea for keeping traffic out of the centre of town) and wandered into the Festival Theatre to book a ticket for Much Ado About Nothing for the next night.

I was really looking forward to exploring. The old wall, some of it going back to Roman times, circles the city centre, Chichester Cathedral sits right in the middle of town, and there’s a lovely park a couple of minutes walk away. But it had been a huge day and all I could manage for then was a quick meal in a friendly little restaurant and returning to my room to fall asleep in front of Doc Martin.