What is the best thing that can happen to a travel blogger when she’s lost all her travel photos? Get the photos back? And that’s what’s happened. I took the camera card to Payam Data Recovery, just to check out if something could be done with it. A week later, I was picking up my photos, saved onto a USB stick. And so I can share the more interesting parts of my recent trip to England after all.  It’s fair to say I’m over the moon.

Back in Ely, I spent ages going from room to room in the house where Oliver Cromwell and his family lived for ten years. It’s quite a well-to-do-looking home, filled with very interesting English historical information, Oliver having run the country for awhile in the 1600s, before the Royals took over again. 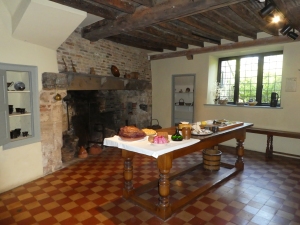 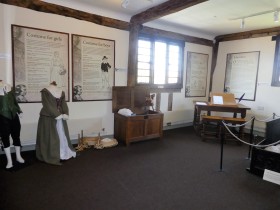 Gasping from the heat by this stage (when will Brits discover air-conditioning?) I caught a train back to Cambridge, a trip of a quarter of an hour, compared with the hour and a quarter it took me to get there by bus.

I woke next morning to fog.

By 10 o’clock, though, it was gone and the sun was out again. When I’d arrived in town a couple of days before, I’d headed straight for King’s College, with its iconic chapel looking out across the river. The chapel is the home of famous King’s College Choir. I have a CD of theirs that I play most mornings (a very sedating way to start the day). I was hoping to catch them but they were on holidays, along with the students.

I had imagined myself, when coming to Cambridge, wandering at will around ‘the backs’, as they call them, the back yards of the colleges leading down to the river, but it wasn’t that easy. Each college owns its own area and the only way you can get to them is to pay to get in. In this way, wandering at will becomes a bit expensive. I wasn’t going to miss King’s, though, so I handed over my travel card to the woman at the college gate.

The other icon I was determined to see was The Bridge of Sighs, not unlike the Hertford Bridge in Oxford, also known as The Bridge of Sighs. By the third day, I’d still had no luck; other than punting along the river, no-one seemed to know how to get to it. I eventually discovered it as part of St. John’s College, linking two sections of the buildings across the river, and causing me to again hand over my travel card. It was worth it, though. 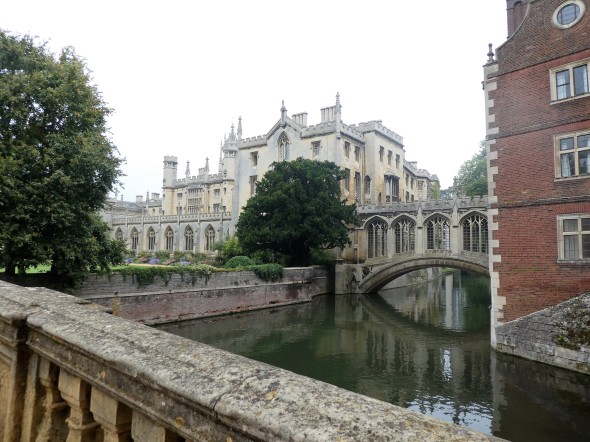 St. John’s is enormous, a bit like a Tudor palace at first look. I can’t say it drew me in as some of the others have. It seemed rather stark with few gardens and mostly pathways and grass, though it is beautiful along the river.

After sitting for a while in the Scholars’ Garden, I wandered back to the The Mill  for a late afternoon drink by the river. Swans glided along its surface, ducks squabbled at its edges and cows rambled, untethered, munching on reeds and grasses in the mill pond. Ah, the good life.

12 thoughts on “Back to Cambridge”