In 2006, on my first trip to Tassie, I left Hobart and headed up the east coast towards Swansea and the Freycinet Peninsula. I was sick of just looking at photos of famous Wineglass Bay; I wanted to see it for myself.

‘The lookout for Wineglass Bay,’ I said to the girl behind the counter at the Visitor Centre. ‘Is it a hard walk?’ She shook her head. ‘So, it’s not difficult then?’ I prompted.

She obviously hadn’t done it – or being still a lithe teenager, wouldn’t have noticed the incline if she had. Middle-aged couples were draped variously along the track, faces purple and hearts pounding.

‘The girl told me this was going to be easy,’ I said to a rotund man, who was going so slowly, even I passed him. He mumbled something in reply and forged onwards. It’s at this moment that the sun came out, for once not helping my situation but making me even hotter.

I finally reached the lookout and joined a grumpy-looking woman and her husband and their three children.

‘Look, Sean,’ the father said to the eight-year-old. ‘Look at the view.’ Sean ignored him. ‘Will, come and look.’

‘Emily.’ He pointed across to a sliver of Wineglass Bay. A 12-year-old girl materialised and squeezed up against him.

‘I’m tired,’ carped William. Emily and her father exchanged a look. The mother started moving away and the boys suddenly got their energy back and pounded down the steps.

I must admit, I was a little disappointed myself. No, I was very disappointed. The sliver of Wineglass Bay was just that – a sliver. Obviously this was not where the photos were taken from. Maybe I took the wrong track, read the wrong sign. It’s a regular failing of mine.

The trek back down gave me a chance to look around me. The peninsula is, effectively, two massive, eroded blocks of granite – the Hazards and Mt. Graham – joined by a sand isthmus. It seemed impossible that anything could erode these majestic, apparently impenetrable giants. 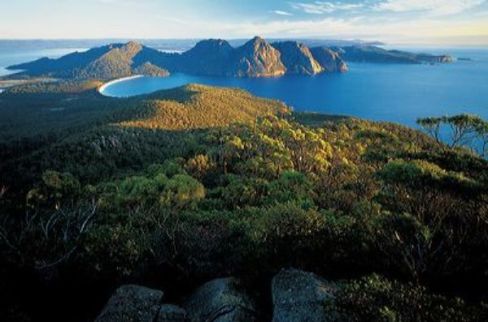 Halfway down, I stopped and rested against a massive rock, vacated by a couple heading upwards. The rain and freezing wind of yesterday was gone and the dark stone glittered in the sun.

Swansea is just one of the gorgeous little fishing villages sprinkled along the east coast.

Even though I was tired and it was late afternoon, I had to discipline myself to keep moving. If I stopped at every one I wouldn’t reach my accommodation at St. Helens before midnight.

It was raining again, as I negotiated a steep, narrow, winding road in the dark, looking for St. Helens Holiday Park. It seemed an odd site for it – I was expecting it to be at the beach – and just as I decided to find somewhere to turn around and go back, it appeared.

All I wanted to do was wrap myself up in my cabin and hibernate, but I’d promised myself a decent meal in a bistro – you can only go so long without vegetables. I stuck my head out the door. The rain was now in sheets, the wind blasted through me and I decided one more day without vegetables was not going to kill me. Riffling through my bags I discovered a small tin of baked beans I’d forgotten was there. Beans are good for you, aren’t they?

This is an excerpt from my book, The Edge of the World, published as an Ebook through Amazon. To download a free sample or to buy the book – click here